Mobile hunting isn’t even that much of a buzzword anymore – If you’re not a mobile hunter, you’re SO 1980s in your approach. The entire hunting industry has basically built itself around the concept over the last couple decades, and if you buy a tree stand or saddle and climbing sticks, you’re automatically included as part of the “in” crowd. But … are you really?

Here’s what I’ve seen and even had to force myself to transition away from over 30+ years of bow hunting: the average “mobile” hunter isn’t really. Sure, he has the capability of being mobile ... but in reality, he’s not taking advantage of it. Most guys I see – and I started off my hunting career the same way – pack in and out the gear required to climb a tree and hunt from an elevated position. But all too often, we’re hunting the same areas. The same pinch points. Let’s be brutally honest; often times, it’s the same trees.

My boys used to ask me all the time as I was preparing to leave for an evening hunt where I was headed. It took a while for them to become accustomed to hearing “I have no idea” as I was literally walking to the car to drive off. And I truly didn’t. To this day, I usually have no idea where I’ll end up. Oh, I know the general area I’ll start, but if the sign isn’t fresh enough or I just don’t like what I find, I’ll bounce to another area without hesitation. Sometimes that’s just going deeper, but other times that means going back to my vehicle and driving several miles to another conservation area.

I killed my second-largest buck to date about five years ago after I made a move that wasn’t due to lack of sign, but rather the presence of another person. I had walked the dry creek bed over a mile back in the pitch-black darkness to where several ridges dropped down to meet one another, forming a narrow pinch point to the right of the creek. I climbed the steep bank and ascended a tree no more than two feet from my exit out of it, confident in the morning thermals rising behind me and the fact I’d left no ground scent anywhere in the direction the deer would approach from.

As gray light broke, my heart rate quickened at the stealthy approach of falling footsteps. As they got closer, I was disheartened to make out a human form, stealthily picking his way opposite the creek bank. I quietly sulked as I watched him climb a tree 45 yards away from me on the other side. I waited a bit and then waived at him as he finally looked my way; we both got down and had a pleasant conversation and I told him I would be hunting somewhere else that afternoon.

Several hours later I pulled into a remote parking spot after studying OnX for a bit and happened to look behind me as I was pulling my gear out of my Jeep; the freshly shredded trees inside the woods were just faintly visible from where I stood. I walked over to them and looked up, and noticed a line leading deeper into the trees. I quickly took up the trail, noticing a scrape here and there littered amongst the rubs – more of what I call “frustration scrapes” than the hood-sized communal scrapes everyone longs to find, but it was still fresh sign and that was what I was looking for.

I went deeper, and emerged into more of a clear-cut area with an old overgrown fencerow approaching from my right. Glancing around, I located a tree I could scurry up quickly and provide a nice vantage point for the rest of the evening. Bright sunlight gave way to shades of gray before the tell-tale “tschk, tschk, tschk” reached my ears, and there was no mistaking the deliberate steps this time. I clipped my release onto my d-loop and was greeted by one of the largest-framed bucks I’d ever laid eyes on, coming from the thick bedding area into the clear-cut. He stepped out only 25 yards from me, but was shielded from me getting an arrow into him by the canopy of the tree I was perched in. He turned to his left, and began walking carefree along the edge of the opening. Placing pressure on the string, I readied my bow to snap to full draw. I only needed three steps… now two. He would emerge from the overhanging branches between us slightly quartered away at 30 yards or so. I was ready… but not for happened next. Suddenly, he stopped – bristling up and laying his ears back. He raised his nose, ever-so-slightly. Then he just melted back into the thick bedding area without taking another step forward. I silently screamed.

Then I noticed why. Out of the right corner of my peripheral vision, I caught movement. Snapping my head that direction, I locked on another brute approaching that I had been completely oblivious to as I had trained all my attention on the giant in front of me. Quickly gathering my emotions, I pivoted to take aim at this second-chance buck and my arrow found its mark a second later.

My public-land, scout-on-the-fly buck wasn’t as big as the first one that he scared away, but at an even 164” of bone – even with a completely snapped-off brow, that had it mirrored the remaining one would have added seven inches to his total – was a nice consolation prize. And once again, it cemented the philosophy I’ve come to accept as Truth: mobile means moving.

ABOUT:Greg Staggs is a frequent feature writer for Petersen’s Bowhunting among other magazines, and for many years he was the former back-page columnist for Inside Archery. His mobile-hunting videos are extremely popular on his YouTube channel, Staggs in the Wild, and you can read some of his past feature articles and numerous blogs at staggsinthewild.com. 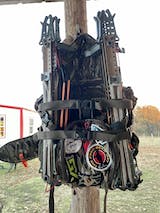